This week's session was a full day fieldtrip to Morecambe Bay and Leighton Moss RSPB in Lancashire. There was a high tide at about 11:30am and so we had hopes of the birds being pushed inland giving us closer views than usual. After a fairly misty and murky start in Manchester, it turned out to be a wonderful sunny November day in north-west Lancashire.


Some members of the class shared cars and drove up together from Whitefield Library whilst others made their own way there. We all met up on the pay-and-display car park near the stone jetty at Morecambe at about 10:45am, where we started the day with some good views of Oystercatchers, Knot, Redshank, four Curlews, a couple of Herring Gulls, some Black-headed and Herring Gulls and later a single Shelduck.


We then walked along the promenade southwards towards the pier in search of Rock Pipits which Peter had seen earlier in the week.  Unfortunately we didn't see any but we did come across a small flock of Turnstones at the water's edge on the way to the pier.  For a short while there was also a single Redshank in with the group.

As there was nothing much about near the pier, we decided to move up the coast to Morecambe
Yacht Club where there is an excellent platform on stilts which is great for viewing the Bay.  From here we could see some male Eider Duck and Red-breasted Mergansers a short distance out to sea as well as more Oystercatchers, Curlew and Lesser Black-backed Gulls along a breakwater.

We then went in search of Scaup along the stretch of shoreline near the Broadway Hotel.  Eight or so Scaup have been seen here fairly regularly but today was a no-show for us.  However there were some good close views of male and female Red-breasted Mergansers here as well as a male and female pair of Goldeneye. There were also some much closer views of Oystercatchers and Curlew at one of the smaller breakwaters.


Our final stop at Morecambe was in a small car park at the northern end of the Bay. Whilst eating our sandwiches we had some great views of two female Eider Duck, a single Little Egret, some Black-tailed Godwits, many Lapwing, a few Wigeon, a single Pochard some more Redshank and a lot more Oystercatchers with a couple of Mute Swans flying past us. The light was wonderful here.


After lunch we made our way up the coast through Hest Bank and Carnforth (home of the famous railway station featured in the 1945 film 'Brief Encounter') to Leighton Moss RSPB.  Our first stop was at the Eric Morecambe salt marsh hide which has been newly refurbished - well completely rebuilt in actual fact.  Unfortunately there was very little about here and the hazy afternoon sun made viewing difficult.  We did see a Little Egret, two distant Greenshank and perhaps a Spotted Redshank as well as some Teal and a single Snipe.

After this we made our way to the Public Causeway at Leighton Moss in the hope of seeing some Bearded Tits.  We gathered in the usual place by the grit trays and although we did hear them 'pinging' once or twice, the birds didn't show for us today.  However, on leaving the grit trays we got our first brief but distinctive call of a Cetti's Warbler.

On the way to the Public Hide we heard a Water Rail squealing like a piglet and also a very tame Robin was posing for photographs and even came a sat on one lady's hand.  From the hide we could see Shovelers, Mallards, Coots, Moorhens, Cormorants, Pochard, Mute Swans and Gadwall.

On the way back from the hide there were still no Bearded Tits showing, but the Cetti's Warbler let rip again with a really loud series of calls - we couldn't see it anywhere though.

From here we went back to the feeding station behind the RSPB Visitor Centre, stopping on the way to see perhaps 50 to 80 Siskins along with a few Goldfinch high up in one of the Alder trees along the route. At the feeding station there was a Marsh Tit and a Great Spotted Woodpecker as well as the usual ducks.

It was now about 4pm and the sun was going down, so we split into two groups for the final event of the day - the Starling roost. One group went into Lillian's Hide whilst the other group went back to the two benches along the high point of the woodland walk on the way to the Causeway from the Visitor Centre.  Some Blue Tits and a Coal Tit could be heard in the trees behind us as we looked across the reserve from this panoramic vantage point and quite a crowd had gathered by now.

After waiting in anticipation of the roost, both groups were rewarded with great views of this amazing natural spectacle.  The Starlings seem to appear in smaller groups from various directions and meet up to form a swirling smoke-like mass of birds over the water. 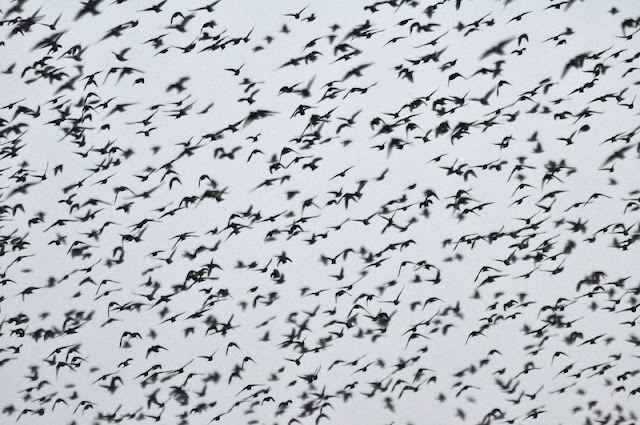 They would twist and turn a while before diving down in to the reed beds.  Whilst we were here, we also got a distant but nice view of a male Marsh Harrier and heard another Water Rail squealing as if someone had stepped on its foot.

There were also a couple of male Pheasants in the field just in front of us and nine Cormorants roosting in a tree on the far side of the water.

The Starling roost probably lasted around half an hour with periods of activity and then lulls and when there seemed to be no more birds flying in, we decided to call it a day. 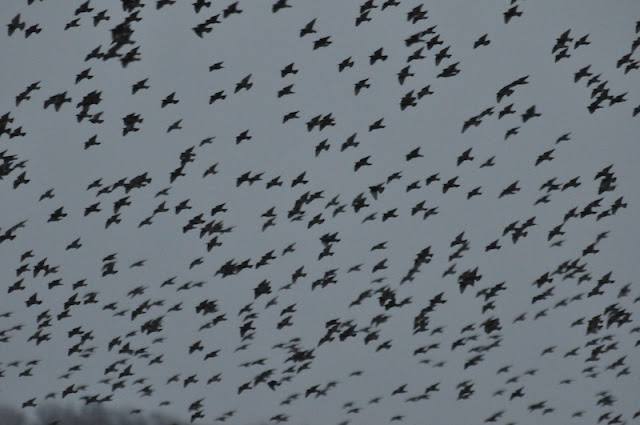 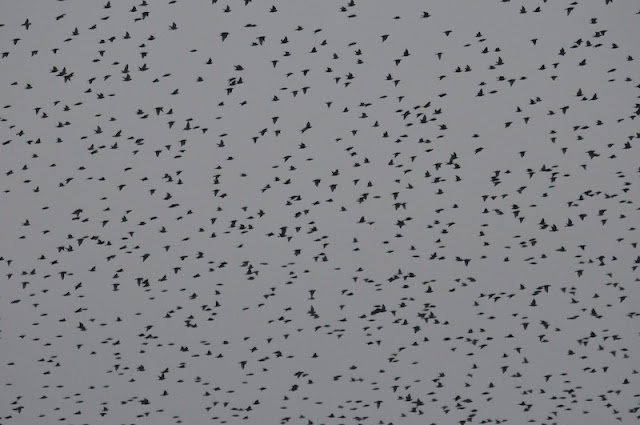 It was a fantastic way to end what had been a great day out.  The total count of birds either seen or heard was 77 species for the day - Wow! Thanks must go to Peter for arranging the fieldtrip and to the drivers for the transportation.
Posted by GeekTeacher at 12:25