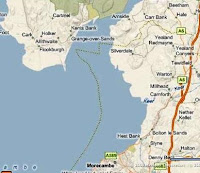 The week's session began by finalising the arrangements for next week's full day fieldtrip to Morecambe Bay and Leighton Moss. A party of cars will be leaving from Whitefield Library at 9:30am and several people will be making their own way there to meet on the pay-and-display car park near the stone jetty in Morecambe at about 10:45am.

We went on to have a quick preview of next week's lesson plan, which specified that the habitat would be:
These coastal wetland environments provide the opportunity to see the largest numbers of species, from wildfowl to buntings. Britain is one of the best places in Europe to see such a diversity due to it's mid-latitude geographical location.

Next we completed our Individual Learning Plans which monitor our progress so far by writing down exactly what Peter told us to!

The main session carried on from last week on the fascinating topic of 'Irruptive Migration', due to the fact that this year is already looking like it may be a good time to see some birds which don't always arrive in Britain in large numbers.  Irruptive migrants are largely dependent on one food source or at least a very limited range of seeds, and if the crops fail in their breeding grounds abroad, the birds can travel long distances to find new sources. Due to this, the birds often arrive in Britain earlier than usual and often in large numbers.

Last week we considered Bramblings and other finches and this week we looked at Waxwings in a little more detail because seven had been reported locally in Barrow near Whalley on 7th November. Peter gave us a map of the location where the birds have been seen, with some ideas about where to look (and park). By visiting the East Lancashire Ornithologists' Club’ website, we later discovered that whilst we were here in Whitefield, 23 Waxwings had appeared in the same location.

The session was finished off by Peter asking us for some target birds for next week. These were:

See you in Morecambe next week!
Posted by GeekTeacher at 22:24