Today's session began with a recap on the species seen during last week's fieldtrip to Morecambe and Leighton Moss RSPB - the total count of birds seen and heard was 77 species. We then had a look at some photos taken the trip using last week's report posting.

Because we had heard a Cetti's Warbler along the Public Causeway at Leighton Moss RSPB, Peter gave a handout on the origin of it's name.  For more information look here in the 'Birds in History and Culture' section.

Following this we took our first look at identifying Gulls in a little more detail. This can be a very difficult topic particularly with the different plumages of 1st and 2nd winter birds as well as adults in breeding and non-breeding plumage.

With this in mind, Peter decided that we would concentrate only on distinguishing adult Gulls for now at least. We started by splitting the Gulls into those with hoods and those without hoods when in full breeding plumage.

Starting with the Gulls with hoods, there are three main species that are commonly seen in Britain in winter:
The Black-headed Gull is the most common of these three and so will be used as the yardstick for comparison with other Gulls.  The bird's bare part colouration (BPC) including the eye is the best way of distinguishing them as well as the wing pattern.

Gulls with hoods have red legs and bills and the darkness of the red intensifies throughout the winter and spring, changing from sealing wax red, through blood red to almost black. These gulls also show a vestige of the dark hood in winter in the form of a 'ear' patch or smudge.

Next time we will look at the gulls without hoods commonly found in Britain over winter which include:
Peter then gave us a handout on the Morecambe tides tables for 2013, which will be very useful for finding the high tides in each month next year.  On another handout, Peter pointed out that there is a high tide at Marshside RSPB on 15 December at 10am and another at Hesketh Out Marsh RSPB on the following day at 10:30am. Guided walks by the RSPB will be taking place on both days at a cost of £3 for members and £5 for non-members.

Here's an online version of the Morecambe tide tables which shows today's high and low tides.  If you click on the table it will take you to the full website where you can look at future tides at Morecambe and indeed anywhere in Britain:

If you want to see the tides for a few local North West locations, go to lower part of the Calendar page. 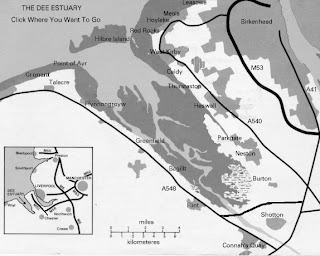 Next we looked at a handout on the Dee Estuary which separates part of England from Wales and which is one of the UK's most important wintering sites for wildfowl and waders.  The mouth of the river has vast areas of sand and mudflats, with salt marsh dominating the landscape to the south. It holds internationally important numbers of 12 species.

It is very important to know the tide times and heights when coastal birdwatching and it's best to plan a visit to coincide with a rising or falling tide, at least an hour or so on either side.  And if visiting Hilbre Island it is essential to know the tides as it comes in very quickly and the island is cut off for six hours or so.

Here's the current tide times for the Dee Estuary:

Finally we had another look at the topical subject of Waxwings which have been showing in fairly large numbers across Britain during much of November.  Peter gave us another interesting extract from the Yorkshire Post about the current influx of these birds from Siberia and Scandinavia.