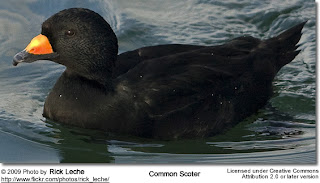 The Scoter (or Common Scoter to give the full name) is an all dark seaduck, the male is totally black and the female lighter, with a pale face. In fact the male Scoter is the only all-black duck found in Britain.

Scoter are often seen as large bobbing rafts offshore, or long straggling lines flying along the coast. The UK breeding population of this small diving seaduck has substantially declined and it is now a Red List species. In winter, Scoter populations are very vulnerable to oil-spills.


In the breeding season the Scoter favours small lochs in N and W Scotland, especially the Flow Country of Caithness and Sutherland.

In winter Scoter are found off the UK coast with concentrations in Carmarthen and Cardigan Bays, along the Moray Firth, and along the North Norfolk coast.


Scoter can be seen offshore all year round but large numbers arrive from October, leaving from March. They are most likely to be found on breeding grounds in June and July. They feed by diving to the sea bed where they find molluscs and mussels to eat.
Posted by GeekTeacher at 13:31