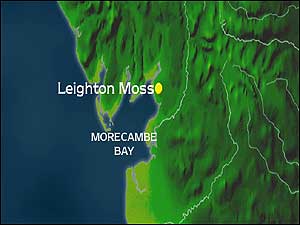 This week's session started off with a short discussion about next week's full day fieldtrip.  Although we would have liked to go to Marshside for the high tide on Thursday 15th November, it seems that the RSPB are running a 'Big Tide Walk' on that day and there would be potentially a lot of people about as well as competition for limited parking places.

Therefore it was decided to go to Morecambe and Leighton Moss RSPB to look for waders and sea ducks such as Eider, Scaup and Scoter as well as watching the evening Starling roost.  Click here to download a map of Leighton Moss.

We then had a brief discussion about what had been seen since the last session with Jean, Mike, Alan, and me all contributing. Jean had seen what she thought was a male Hen Harrier flying over rough pasture in the Bollington area of the Peak District and after she had described it as pale grey with black wing tips, Peter confirmed her identification.  Mike had seen a number of species in the Nottingham area including Sherwood Forest.  Alan had been on a trip to Spurn Head with the Bolton RSPB and I had been to Robin Hood's Bay, Whitby, Bempton and Flamborough Head on a three day break with my wife, where we had seen Divers for the first time. 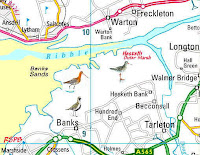 After this we looked at a handout on the Ribble Estuary, which is one of the most important places for waders in the whole country as well as being home for seven of the twelve species of British Raptors in winter.

On the south side of the Ribble Estuary the key places to watch birds are at Marshside RSPB, Birkdale beach, Crossens Marsh and Hesketh Out Marsh RSPB, where up to 50 species can be seen in winter if all these sites are taken in.  Click here for an information leaflet.

One of the main topics of this session was 'Irruptive Migrations', particularly of finches and other birds such as:
We then went on to look at which birds we might expect to see on our fieldtrip to the north-west coast next week.  High tide will be at about 12 noon and this will push the birds close to the shore line, making them easier to see.  At Morecambe there is a sandy shoreline with salt water and we hope there will be waders including Knot, Dunlin, Curlew, Redshank, Oystercatcher, Grey Plover and Bar-tailed Godwits (which prefer salt to fresh water) as well as seaduck such as Eider, Scaup and Scoter. 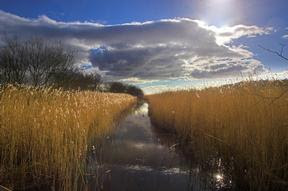 At Leighton Moss, the hides on the salt marshes should have more or less the same waders plus Little Egrets, Red-breasted Merganser, Spotted Redshank and perhaps a raptor or two such as Marsh Harrier, Merlin and Peregrine Falcon. The Great White Egret might even be about somewhere.

We spent a little time looking at the features of some of these birds through a series of handouts, mainly concentrating on two seaduck, Scaup and Scoter. Seaduck are built quite differently to other ducks, being 'broad beamed' to maintain stability in the waves so that they can roll with the tide.

We finished off the session by looking at identifying the different types of Divers, mainly because I had seen some at Bempton Cliffs RSPB earlier this week and had found it hard to be sure which species they were due to the distance and the birds being in winter plumage.

Now our appetite is well and truly whetted for the field trip when some of us will hopefully get to see birds we haven't ever seen before.
Posted by GeekTeacher at 19:35