Today's session was a fieldtrip to Pennington Flash in Leigh.  It was a pretty awful day for going out and about, but that didn't deter the intrepid birders from the Whitefield 'Birds and their Habitat' class.  Today we were joined by Barbara from the Ramsbottom class making a total of 12 birders plus Peter.

We got to Pennington Flash at 1:30pm and waited on the car park for everyone to arrive.  This area of the Flash is normally very popular with families who feed the ducks, swans and other birds here and this has caused them to amass in great numbers here.  Amongst the flocks there were Canada Geese, Mallard, Mute Swans, Black-headed Gulls and a large single resident Muscovy Duck (presumably a farmyard bird or escapee) which to me looks more like a goose than a duck.  There was also a small group of Moorhens on the grassy area to the left of the car park and many Coot in the water.


Peter decided to go to Bunting Hide first of all as it has been closing early on some days due to staffing problems and we didn't want to miss it.  Bunting Hide is a feeding station and therefore you are nearly always guaranteed a good number and variety of birds there.  One of the specialities here is the Willow Tit, a bird that we have recently been discussing in the class and some people come quite a long way to see them here.

Here's a photograph of a Willow Tit that I took here on a previous visit.

Other birds of note here are the very brightly coloured male Bullfinches, of which only one was seen today - but it did look very smart with it's newly developed plumage after the summer moult.  Sometimes there can 10 or 12 of these birds feeding here, along with the more subdued coloured females.

There are always a variety of titmice at Bunting Hide and today we saw Coal Tits, Great Tits and Blue Tits.  There are also usually a few Long-tailed Tits here (although not strictly one of the titmice Paridae family) but none were seen today.  Male and female Chaffinches were also present as well as a huge party of Greenfinches feeding in one of the cages - there were at least 12 of them and I've never seen so many here at once before. Finally there was a Robin, Stock Dove and Moorhen bringing the species count to 10 - not bad for a start!


From Bunting Hide we went on to Horrocks Hide, the largest and possibly best placed of all the other hides.  On the way there we had a brief stop to look over the Flash where we saw a Great Crested Grebe, Tutfted Ducks, four or five Pochard in the distance and some Gulls standing on the coloured buoys.  Peter pointed out that one of them was a Common Gull with yellowish-green legs and white 'mirrors' on it's wing tips but you really needed a spotting scope to see these features clearly. There were also both Great Black-backed and Lesser Black-backed Gulls on the other buoys.

Horrocks Hide overlooks a long thin strip of land known as 'The Spit', which is the remains of an old railway line that used to pass through this area.  In recent weeks the Spit has disappeared altogether under the volume of water caused by the very heavy and frequent rainstorms, but today a fair amount of it was viewable even though the water levels are generally still quite high. 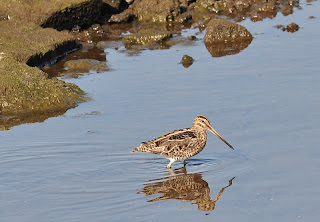 The Spit is often a great place to see waders, but today there were few if any about - even the normally present Lapwing were missing  The Cormorant numbers are increasing once again after their absence in the summer and there were at least two white-bellied juveniles at the end of the Spit.

There were also a lot of Canada Geese present.  In the pools there were Teal and Mallards, with a Great Crested Grebe in the distance.  Perhaps the best bird to be seen today were four Common Snipe which were distant and very well camouflaged as they sat low amongst the vegetation at the far end of the Spit, only occasionally wading in to the water.  To the right is a photograph I took of a Snipe here from earlier in the year:

From Horrocks Hide we went on to Tom Edmonson's Hide and the first bird we saw there was a juvenile Grey Heron.  The rain was starting to become very heavy by now so we were grateful for the shelter.

The shingle scrapes were all but under water and so there was little chance of any waders, but there were Gadwall, Teal and Mallard pairs feeding here as well as a single pair of the large-billed Shoveler.  The drake was just coming out of eclipse and starting to regain it's colour.  There was also a male Cuckoo! Wait ... did I say Cuckoo? Well it was actually Peter's excellent impression of a distant Cuckoo which he started up when I mentioned to Alan that I'd heard a Cuckoo here in the spring. I'm sure he's had many people fooled with that one before now!


After the rain had died down a little, we decided to move on. En route to Ramsdale's Hide a blackbird flew across the path and we could hear Long-tailed Tits in the bushes.  A member of the class was keen to see a Kingfisher here and it didn't disappoint, first by perching on a submerged post at the far end of the pool and then by flying fast and low across the water in a shimmering iridescent bue blur towards the left side of the hide.  Also of note here was a Little Grebe that put in a brief appearance amongst the usuals of Coots and Mallards and some Lapwing were seen briefly overhead. Outside in the trees, more Long-tailed Tits could be heard and Peter said he could also make out a tiny Goldcrest from its call.

Our final call for the day was at Teal Hide, which is a short walk through the trees towards the Golf Course.  On the way Peter stopped us to listen again for Long-tailed Tits and also Willow Tits, and there was also a Robin or two along the path. At Teal Hide the water level was very high and so there was little dry land for waders, as has been the case for most of this year.  There were however, several pairs of Shovelers, some Gadwall and Coots and a Moorhen here. And then it was time to go home.

So in summary, here's a list of all the birds seen today:

Some 37 species - not bad for a dull and wet Thursday afternoon.


If there were any more or there are any corrections needed to the text, please let me know by e-mail (geekteacher.mpj@gmail.com).

A great (if a little wet) afternoon out in very pleasant company - now I'm off for some soup and soldiers to warm up a bit - see you next week!


Martyn Jones
Posted by GeekTeacher at 16:39