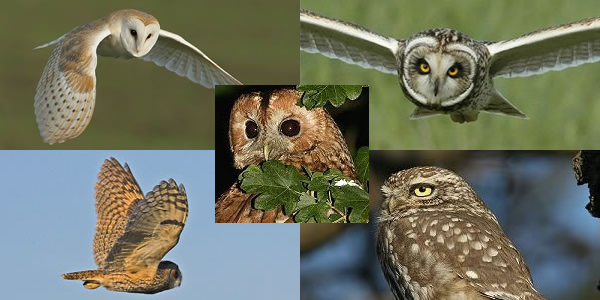 Humans like Owls and seem to have an affinity with them.  Perhaps this is due to their human-like features of a rounded face and binocular vision.  They even seem to have ears, although what is usually seen are just tufts of feathers which complete their faces. Their facial discs are actually sound receivers which collect and focus the nearby sounds rather like a satellite dish.  It's the Owls' hearing that enables them to hunt so well at dusk or in the dark.

There are five species of Owl found in the UK:

The Tawny Owl is the most common Owl in Britain. It can be found almost anywhere there is mature trees, including woods, parks and large gardens. They nocturnal birds in their hunting but do use exposed perches.  The most characteristic feature is perhaps their distinctive call which is well-known to most people but many do not realise that the sound you learn as a child is both the female and male birds calling and answering. The female' sharp 'ke-vick' call is often preceded by the male's 'hoo-hoo-hoo', especially in Autumn.

Most of the calling you hear is that of young males that have dispersed from their parents' territory to find their own.  They call from dusk to dawn to establish if another male is nearby.  Tawny Owls are very sedentary and rarely move far from their birth place during their whole life.  A local Tawny Owl was ringed when it fledged and was found dead 21 years later barely a mile from where it was ringed. Most of the time the Tawny just sits and waits before dropping on its prey - it knows every detail of it's environment and can detect the slightest movement.

The Barn Owl is sometimes called the Screech Owl due to its blood-curdling shriek.  They are found in open country such as farmland, meadows and downland.  Old barns and trees provide nest sites with rough grassland providing their main food source of voles.

Barn Owls are mainly nocturnal, but when they have young to feed they hunt in daylight. They can be seen over roadside verges and field margins or passing through headlight beams.

Short-eared Owls are found on coastal marshes, moors, fields and young forestry plantations.  They are commonest and most widespread in winter due to autumn influxes of Scandinavian birds. The Short-eared Owl hunts in daylight with late afternoon seeing peak activity. They 'quarter' open country fields on long wings and several can hunt in one area if the vole count is high.  Harsh 'barking' calls are made during mid-air disputes.

Long-eared Owls are found in areas of scrub and trees, including hedgerows, shelter belts, woods and heathland.  They are very secretive and can be very difficult to see as they hunt at night.  Communal winter roosts assemble in thick scrubs and late autumn brings the last chance to find 'tired' immigrants resting in the open.  The young make 'squeaky gate' begging calls in late spring. Courting males make a low, but far-carrying mournful "oh" sound.


The Little Owl is found in open country with mature trees such as farmland, parkland and downland.  It is about the size of a fat Blackbird and has a small stumpy form on fences, telephone poles and the boughs of trees at dusk.  Little Owls fly with fast wingbeats and glides, swooping up to a perch. They make a soft but far-carrying "Goo-ek" or "Weew" sound at dusk.

These compact Owls ooze character; they're small but they have attitude, accentuated by their piercing yellow eyes and permanent scowl.  Although they might seem at home in here, the Little Owl is the only non-native Owl in the UK.  The thousands that now exist in Britain all originate from the few that were released into Northamptonshire the 19th century by Lord Lilford.

Here's a BTO video on identifying Short-eared and Long-eared Owls: