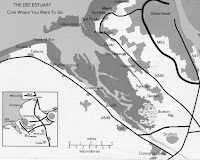 Today's session started with Peter listing the 62 bird species he saw this week on a five hour trip to the Wirral Peninsula.

All the above links are to the excellent Dee Estuary Birding website from which this map was also downloaded. 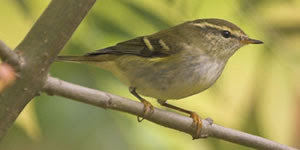 We then went on to look at an article from the Yorkshire Post (29/09/12) about autumn migrants on the east coast this year.

Our main focus in the article was on the Yellow-browed Warblers which have been brought to such places as Spurn Point on the Yorkshire coast by this week's strong winds and heavy rain.


The Yellow-browed Warbler breeds in the Ural Mountains across Asia and usually migrates through China to wintering areas from central Nepal southwards to the Malay Peninsula.  But some birds seem to be changing their migration pattern and are arriving in the UK in increasing numbers each autumn.  In October 2005, 1250 of these small warblers were recorded in the UK -  so how many were there actually present and how many first set off from the Urals?  The species is no longer a rarity here as it once used to be - it is now the most common Siberian migrant to pass through the UK.

Yellow-browed Warblers have now been recorded in most European countries and even in Senegal, Africa.  The question as to why this is happening and what is making them migrate in a completely different direction is perhaps due to the considerably shorter distance than the traditional route to south-east Asia.

During the course of reading this article we also discussed the concept of faunal zones or ecozones and in particular the Western Palearctic and Eastern Palearctic zones of Eurasia.

These are large areas of the planet's surface with their own distinctive fauna and flora due to physical boundaries such as mountain ranges, oceans and deserts.

Following this very interesting discussion we went on to recap the weather conditions needed to produce good 'falls' of migrants landing in the UK during Autumn.  Many Scandinavian songbirds migrate south-east over the North Sea for the winter and they set off during a period of high pressure when the skies are clear and the winds are light.  They usually fly at night when there is less chance of predation and they can easily use the stars and moon to navigate, along with the earth's magnetic field.

However, if they meet a low pressure weather system from over the Low Countries (Netherlands, Belgium, Northern France etc) where the winds are much stronger and in the opposite (easterly) direction, they can be forced off course and need find land on the east coast of Britain, rather than ditching in the sea where they would probably die. Therefore, the criteria for good numbers of autumn migrants on the east coast are: 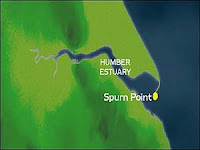 Conditions such as these can bring a whole host of common birds and rarities to places such as Spurn Point, which is a very popular place for birders in Autumn provided the weather conditions are right.

A bird observatory has been set up here as it is a key recording site for the UK and you can even book an overnight stay there for just £12 if the fancy takes you.


On the west coast of the UK, autumn is good time for seeing seabirds blown close inshore and even inland from the Irish Sea and Atlantic Ocean.  The weather conditions which facilitate this are strong to gale-force westerly winds from the Atlantic.  These will bring in such pelagic (ocean-going) birds as Shearwaters, Petrels, Skuas, scarce Gulls and Phalaropes and October is a good month to see all these species.

We briefly finished this section by recapping on the weather conditions that can make a productive trip to Parkgate on the Wirral at this time of year.  Parkgate is well-known for it's high tides bringing in raptors hunting for the rodents and small mammals that are trying to escape the rising water levels on the marshland.  However, the conditions need to be just right, so:
With this in mind, Peter issued the class with a printout of the Sunday high tides for October 2012 and I'm lucky enough to be going to the first one on Sunday 7th October.

Next we went to have a look at last week's 'homework', which was to read an article on how to identify the 'twin species' of Marsh Tits and Willow Tits.  These are discussed in the 'Birds in Focus' section of this website.

The main session was then concluded by discussing the arrangements for next week's field trip to Pennington Flash in Leigh, with the focus being on the birds that might be seen on our visit.  More on than next week.

Finally, I presented this website to the class and I'm pleased to say that it seemed to be well-recieved by Peter and the other members. I've written a little 'Thank-you' here, together with a few more details about the aims of the website and how people can contribute to it.

Would you believe it? A Yellow-browed Warbler has been reported at the Wigan Flashes on Saturday 6th October.  Watch out for the rush !
Posted by GeekTeacher at 16:19