Bearded Tits or Bearded Reedlings as they are known in some books, are a brown, long-tailed bird, usually seen flying rapidly across the top of a reedbed. The males have black 'moustaches' rather than 'beards'. Although they have a superficial resemblance to Long-tailed Tits, they are not part of the true titmouse family (Paridae) and hence the alternative name. They are sociable and noisy birds, and their 'pinging' calls often being the first clue to their presence. The birds are particularly vulnerable to severe winters and their population has declined in recent years, making them an Amber List species. 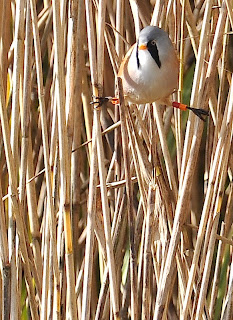 Bearded Tits spend their lives in reedbeds (the only place they are found) but they may move away from breeding areas in winter.  Although they can be seen all year round, calm autumn days between 8am and 10am are the best time to look out for them when 'eruptions' sometimes fly high above the reed beds.  In spring and summer they eat insects, insect larvae and spiders and their diet changes to seeds in autumn and winter.

Ringing records show that it is mainly juveniles that are involved in the 'eruptions' - once they have completed their moult a proportion fly up above the reedbeds in a rapid climb accompanied by loud 'pinging' calls. Many will plunge straight back into the reeds but a few will fly up again and move off in all directions, stopping only at another reedbed.  This is how Bearded Tits are establishing themselves in Scotland, Wales, Northumberland, Cheshire and the Wirral.

The grit trays along the main 'Causeway' at Leighton Moss RSPB are an excellent place to view these birds in October, when they start to change their food source from insects to seeds. The birds need to swallow grit to grind up the grain in their stomachs as part of the digestive process.

Blacktoft Sands RSPB near Goole and close to the head of the Humber Estuary is a major stronghold for this species, where they can usually be seen from the Marshlands, Singleton and Townend Hides. However, the birds have had mixed fortunes over the past few years with two hard winters drastically reducing numbers from 300 to just 50 because the reed heads containing the seeds that are their only winter food source had frozen solid.

The cold and very wet April weather also meant an almost total failure of their first nesting attempts (the first time this has ever happened) but since then they have managed to produce good numbers of late broods and some of these birds will be taking to the skies to establish new colonies.