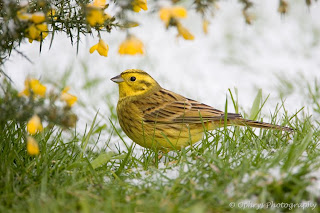 Male Yellowhammers are unmistakeable with a bright yellow head and underparts, brown back streaked with black, and chestnut rump. In flight it shows white outer tail feathers. They are often seen perched on top of a hedge or bush, singing. Its recent population decline make it a Red List species.

Yellowhammers are found across the UK but are least abundant in the north and west, and absent from some upland areas, such as the Pennines and Highlands of Scotland, as well as some lowland areas, such as the Inner Hebrides and the Orkneys. They favour farmland and open countryside with bushes and hedgerows.

Yellowhammers can be seen all year round and they eat seeds and insects.
Posted by GeekTeacher at 19:01