This was the first session of both the new term and the new year and so much of the first part was concerned with basic administrative tasks.  During the term we will be looking at the following topics:
There was also a lot of chat about what people had seen during the five weeks since the last session. Alan and Martyn had seen Waxwings in Howe Bridge Crematorium in Leigh, and had taken some good photographs like this one:


Laura had been to Whixall Moss in north Shropshire where she saw a Hen Harrier amongst many other birds. Alan had been on a trip around Moses Gate Country Park in Bolton with Bolton RSPB  and was told about a good place to see a wide variety of dragonflies at Darcy Lever Gravel Pits.  This should also attract birds.

Martyn had seen a Spoonbill and Great White Egret at Marshside RSPB at Southport, two Barn Owls in Horwich and a trip along the North Wales coast had been very productive with Hawfinches, Red-throated Divers, rafts of Common Scoters and Snow Buntings all being seen at various points along the coast.

The class then chatted briefly about this week's BBC Winterwatch programme where Waxwings were shown feeding out of a young lad's hands in Fair Isle, Scotland and Snow Buntings were shown in large numbers on the east coast.

The main focus of the session was about identifying our two species of wild swans, the Whooper and Bewick's Swans, which superficially are both quite similar.  Another extract from Bill Teale's Birdwatch articles in the Yorkshire Post was handed out informing us that a regular 'herd' of 100 plus Whooper Swans returns each year to the Lower Derwent Valley reserve between York and Selby.  And this year they have been joined by up to eight Bewick's Swans, which is the largest number seen on this reserve for ten years.

Peter started the wild swan identification by 'going off on one' about how the Collins Guide (the birders' bible) calls the Bewick's Swan a Tundra Swan to cater for the book's American audience.  He didn't stop there either, also indicating that he doesn't like being referred to as 'you guys' by cinema attendants when he and his wife go to the pictures.

After he had calmed down a little, Peter went on to describe the adult Bewick's Swan as being smaller, stockier and having a shorter neck than the Whooper Swan, but when only one bird is present the size difference may not be as apparent.  Therefore it is better to look at the bill pattern and overall extent of the yellow colouration.

On a Bewick's Swan, the yellow area doesn't come to a point, and it is less extensive finishing 'rounded off' above the nostril. So, from a distance, the bill is predominantly a black or darkish colour.

On a Whooper Swan, the yellow bill colouration comes down to a sharp point and because it almost exactly follows the bill outline, it almost looks like a 'bill within a bill'. Therefore, from distance, the bill look predominantly yellow in colour.

The Whooper Swans found in Britain are largely winter visitors from Iceland. On migration they visit estuaries and wetlands in north west England for winter roosts. The Bewick's Swans are winter visitors from Siberia and so are found mainly in eastern and southern Britain, although they can also sometimes be seen on the Wirral at Burton Marsh and in Lancashire. For more information look here.

Finally, we were given a photo of a swan to identify and this turned out to be a 1st winter Whooper Swan due to it's bill colouration and lighter colour, having lost most of its juvenile brown-coloured down.

We then went on to briefly look at the identification of wild geese (as opposed to the feral Canada and other 'farmyard' geese so common in parks and water bodies). These wild geese have traditional and separate wintering grounds, and so the location of the sighting is an important aid to identification.


Almost all the grey geese sightings in north west England will be of the Icelandic race of Pink-footed Goose.

These geese make landfall in September on the west coast and sometimes migrate as far as Norfolk in eastern England.


The Taiga Bean Goose comes from Finland or Arctic Russia and so is found mainly in eastern England in places such as Norfolk - therefore it is not normally seen in north west England.

Pink-footed Geese have two main wintering areas: the Ribble Estuary and East Lancashire Mosses and the area around the Wash in eastern England.


To distinguish them from the non-migratory and low-flying Canada Geese, the migratory 'Pinkfeet' fly much higher from west to east or east to west across the country and make a bugling wink-wink-wink call (like children in a distant playground according to Peter) rather than the loud honking calls of Canada and Greylag Geese. 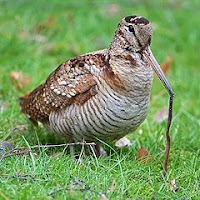 After this we were given another photograph to identify and this turned out to be a rare daytime picture of a Woodcock, a nocturnal or crepuscular, woodland bird that is mainly active at dusk and dawn and which is not often seen during the day unless flushed.

Martyn recounted a visit to Risley Moss Nature Reserve when just as he was about to set off for home at dusk, twelve Woodcock flew overhead silhouetted against the night sky.

We briefly finished off by looking at scientific paper about Hen Harriers.  There are great concerns for the future of these beautiful birds as they are on the brink of becoming extinct in England where only one breeding pair was recorded in 2012, although there were more in Wales and Scotland.

We were given another extract from the Yorkshire Post about the Singleton Hide at the RSPB's Blacktoft Sands reserve near Goole which is a good place to see harriers and other birds of prey in winter.

The harriers gather together to roost in large numbers in the reeds and as well as six male and six ringtail Hen Harriers, more than twenty Marsh Harriers are present as well as a supporting cast of Peregrine Falcons, Merlins, Buzzards, Sparrowhawks, Kestrels and Barn Owls.

Peter finally ended the session by handing out a British Bird checklist sheet for us to keep a tick list of what we see this year.
Posted by GeekTeacher at 18:26