We began today's session by looking back at the species we saw on last week's fieldtrip to Pennington Flash in Leigh, the highlights being the Willow Tit, Nuthatch, Kingfisher and Snipe some of which were 'lifers' for a few members of the class.  See the end of last week's posting for the full species list.

With this being the 25th anniversary of the Great October Storm of 1987 (you know, the one which BBC weather forecaster Michael Fish infamously said that a hurricane wasn't on its way), we spent most of this session looking at 'Birds and Weather'.

Our discussion was based on an article from the Sunday Telegraph which looked to dispel some of the myths about this 'hurricane' and the affects it had on people in the UK.

In Michael's defence, the writer was keen to point out that the video clip that most people see is actually cut short, because he goes on to say, " ... but having said that, actually the weather will become very windy". 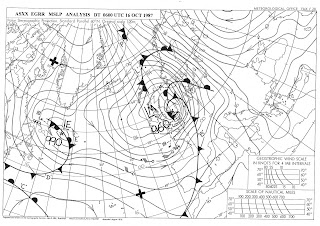 However, the term 'hurricane' has a very specific definition to a meteorologist and only occurs in the tropics.  The term 'hurricane force' means sustained winds which average 73mph and this did not happen during 15 and 16 October 1987.

So strictly speaking, Michael Fish was actually correct, a hurricane was not on it's way, although to most people in the south-east it certainly was a severe and destructive storm which is the dictionary definition of a hurricane.


But that spoils the 'fun' doesn't it, and so this myth is another case of 'never let the truth get in the way of a good story'!

Another myth is that the storms affected the whole country when in fact only the part of the country east of a line form Bournemouth to the Wash experienced the storm.  For this area the weather was very severe with gusts up to 115mph and 18 people dying as a result.  15 million trees were uprooted and Kew Gardens suffered many losses of ancient trees. In addition insurance losses exceeded £3 billion at today's prices.

So what's all this got to do with birds? Well, as we have been learning, birds are very much affected by the weather and several species of seabird were blown inland across south-east England as a result of the storm.  These species which breed in the high Arctic would have been on their southward migration when they got caught up in the storm.

We were asked to consider which species might have been affected and came up with the following list:

Next we looked at two specific species which were seen at inland waters all over southern England in the days following the storm: Sabine's Gull and Grey Phalarope. We read a section of the book 'Birds and Weather' by Stephen Moss which told us that both these species spend the late autumn feeding in the Bay of Biscay which was where the Great Storm originated.

A block of cold polar air originating from Hurricane Floyd on the east coast of America, moved south from the Atlantic and met the warm, moist air in the Bay of Biscay.  This caused a sudden and large drop in pressure down to just 959mb forming a depression gathered speed as it passed along the northern edge of an anticyclone.  A great number of both of these birds were swept along by the ferocity of the wind.

In spite of this, most of the displaced birds seemed to be in remarkably good condition. To quote from the book, 'Indeed the fact that the vast majority were found on extensive areas of open water where they were able to feed and recover suggests that they were mainly in good health.  This contrasts noticeably with the usual weak and disorientated condition of most wrecked seabirds'. 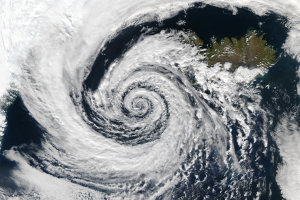 A likely theory for this suggested by Norman Elkins is that rather than fighting the storm and becoming exhausted, the gulls and phalaropes remained in the central 'eye' of the depression, which is relatively calm and away from the strong winds circling around it.

Once they sighted the English coastline they dropped out of the eye and were swept inland by the fierce southerly air stream and, as the winds weakened, the birds came to land relatively unscathed.

Apart from Sabine's Gulls and Grey Phalaropes there were not many other species, mainly due to the late date of the storm: had it occurred a month or so earlier, there would have been more 'wrecks' (large numbers of dead birds) of petrels and other birds. But by mid-October they were far out into the Atlantic Ocean beyond the reach of the storm.

After this fascinating discussion on Birds and Weather, we went on to look at three species of birds which are likely to be seen at this time of year:
After a brief recap on the world's 'Faunal Zones' as discussed in a previous session, Peter handed out a map of the world's zones as well as chart showing shore and estuary birds in autumn and winter.

Finally we were given colour photographs of three 'mystery' birds to identify, on of which Alan had taken at Marshside during the high tide on Tuesday this week.  For each bird we had to identify the species and plumage stage and they turned out to be:
At the end of the session I showed the class the short report I'd put on this website about the Pennington Flash fieldtrip, and said that any contributions of photographs, reports or articles on any topic would be very welcome.

It's half-term next week, so the next session will be held on 1st November. See you then.
Posted by GeekTeacher at 08:49