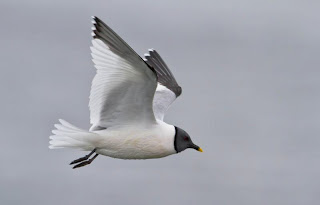 The Sabine's Gull is a small gull which breeds in the arctic and has a circumpolar distribution through northernmost North America and Eurasia.

Occasionally individual Sabine's Gulls can be seen off other coasts such as the northeastern United States or further east in Europe, typically following autumn storms. 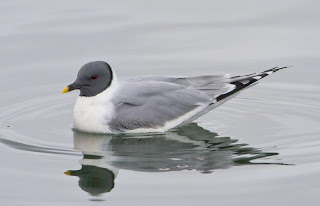 This species is easy to identify through its striking wing pattern. The adult has a pale grey back and wing coverts, black primary flight feathers and white secondaries. The white tail is forked. The male's hood darkens during breeding season.

Their bills are black with a yellow tip. Young birds have a similar tricoloured wing pattern, but the grey is replaced by brown, and the tail has a black terminal band. The juveniles take two years to attain full adult plumage. They have a very high-pitched and squeaking call.


The Sabine's Gull breeds in colonies on coasts and tundra, laying two or three spotted olive-brown eggs in a ground nest lined with grass. It is very pelagic outside the breeding season and takes a wide variety of mainly animal food, and will eat any suitable small prey. It also steals eggs from nesting colonies of Arctic Terns.

It is named after the Irish scientist Sir Edward Sabine, who had sent a specimen to his brother Joseph Sabine when it was first described in 1819.