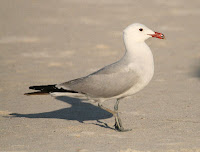 During his short academic career Audouin became well-known in scientific circles for his entomological studies, but he also contributed to several other branches of natural history including ornithology.

He was one of the leading French entomologists of his day and also worked on the fauna of Egypt after Napoleon had invaded.

In 1826 his friend B. C. Payraudeau published the first scientific description of a gull which inhabited rocky mediterranean islands and it was he who named the gull after his 'excellent ami' M. Audouin.

Today Audouin's Gull is the rarest gull in the world with only 5000 breeding pairs.
Posted by GeekTeacher at 21:18